The East Blue Trading Company is a neutral group sailing the seas of East Blue.

The EBTC (East Blue Trading Company) was formed in Havana. A meeting between the business mand Thogretor Windsailor and the wandering monk Lahduk began the creation of the crew. A third man, listening nearby, also joined the group. This person was Taikutsushita M. Jack, a man down on his luck. The group decided to head to Chippingwood after the Harmony tournament to find/build their own ship.

Due to being a newly formed group, this article is currently empty. 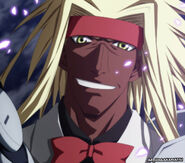