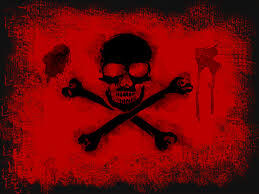 The Crimson Pirates are one of the most notorious pirates in the world. They combine a powerful array of ships and pirates with their leader's cleverness in order to rise to the top. Despite being a large pirate crew, they are involved more with amrs dealing and smuggling over raiding towns and ships. If you want access to the rarest goods, the crimson pirates is the place to go.

The crimson pirates are lead by Captain Silas Valentine. The 2nd-in-command and all of the ship captains in the crew are all brothers and sisters.

Captain Silas Valentine is a clever and kind man despite the way he looks. He's fiercely protective of his family, especially his little brother Gabriel. Silas used to be a very handsome playboy until a horrible accident burned the side of his face. This is why he wears a skull mask to cover most of his face. Silas is an expert marksman and uses the best weaponry in battles. Much like him, most of the Crimson Pirates are known for their use of high quality weaponry, due to them being one of the largest arms dealers in the world.

Silas before he got burned.

The "Playboy" Gabriel Valentine is Silas' younger brother. He accompanies Silas on their flagship, "Misfortune", acting as the lovable presence on board. Silas is known to dislike fighting, and is often accompanied by many women. Not much is known about his fighting strength, but it is said that he has a few tricks up his sleeve.

Selena Valentine is Silas' only sister and captain of her own ship, "Heartbreaker". She is the exact opposite of Gabriel, she breaks hearts and bones everywhere she goes. Silas sends Selena when he wants a job done well. Officials and traders are often fooled by her pretty face, but learn better once they find themselves with empty pockets. Selena's crew is entirely made up of strong able bodied young men that follow her to the letter. She fights by using her trusty long range rifle.

Marco and Vincent are twins, and the youngest of Silas' siblings. Marco and Vincent are extremely relaxed and happy-go-lucky brothers. The twins are usually seen porting at big port cities and enjoying the cities fine wine and delicacies. They are however, the biggest thieves in the Crimson Pirates, often those cities find that their treasures have been stolen in the night after a visit from the twins.

Community content is available under CC-BY-SA unless otherwise noted.
Advertisement